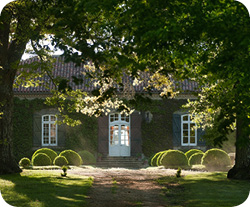 Since 1711, the Château de Lacquy, in the heart of the "golden triangle" also called the "Grand Bas Armagnac", has been dedicated to Armagnac. Owned by the same family since 1711, it is the oldest family estate producing armagnac.

This 400 hectare property is a true ecological setting made up of forests, lakes, prairie and fields. In the hollow of this protected natural balance, 20 hectares of vines flourish on a light soil composed of brown colored sands imprinted with iron oxide and sediments of maritime origin.

Due to its geographical location, the excellence of its cellar and the care taken in the development of its products thanks to an ancestral tradition, Château de Lacquy brings together the ideal conditions for producing the best Armagnacs. Véronique and Gilles de Boisséson, 11th generation at the head of the estate, and with them the teams who work at Lacquy, obsessively seek the quality and authenticity of their product, the expression of what has always been the hallmark of this terroir: absolutely pure, complex, lively Armagnacs, of great finesse and softness.
All these reasons why their Armagnacs are praised by connoisseurs, high-end cellars, and prestigious locations, in France and all over the world.