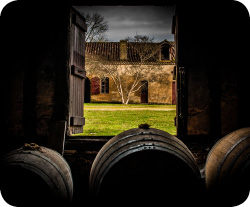 The 8th generation
The story started in 1820 when Jean Dominique Laudet, returned from the West Indies where he had passed 20 years of his life in the spice business. At this point he decided to fulfill his dream: spending the rest of his life producing the oldest alcohol in France, Armagnac.

Château Laballe’s Armagnacs soon became widely renowned to such extent that more than 200 barrels of Armagnac were exported to NewYork ! Since that time, the Laudet family passion has been passed down from father to son : Jean Dominique, Alexandre, Julien, Fernand, Robert, Noel, Christian at today Cyril. Continuing years of family know-how, while each leaving there own mark on Laballe. In 2009, Cyril was joined by his wife, Julie, seduced by the Laballe universe and uplifted by Cyril’s passion. Today, they are the 8th generation to be in charge of Laballe winemaking!

Château Laballe is located in Landes Bas Armagnac, in the heart of its appellation. Located on sandy soil which is said to be some of the best of the
region: the Sables Fauves. The armagnac draws its originality and refinement from this unique ”terroir” which gives a strong and precious identity to the Chateau Laballe.